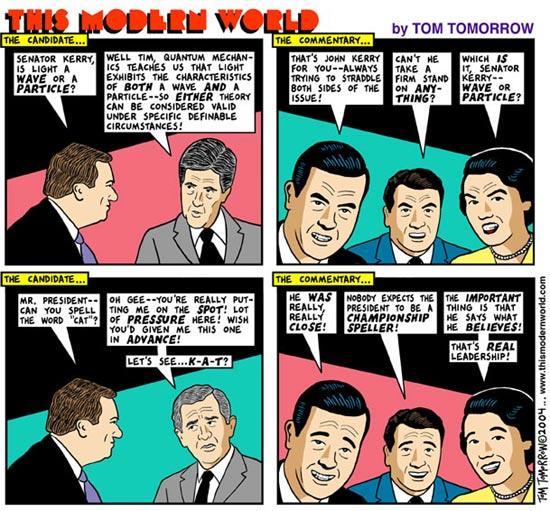 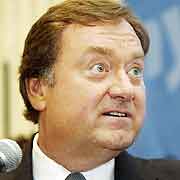 This webpage is dedicated to the late NBC News presenter Tim Russert (1950 ? 2008). He was a conservative pundit for NBC and MSNBC. Tim Russert was the Managing Editor and Moderator of "Meet the Press" and political analyst for "NBC Nightly News" and the "Today Program." He anchored "The Tim Russert Show," a weekly interview program on CNBC and was a contributing anchor for MSNBC. Tim Russert also served as senior vice president and Washington bureau chief of NBC News. Tim Russert was not a journalist, he was a neo-conservative political pundit who was famous for his "gotcha" interviews. Bush White House official Cathie Martin testified in a court of law that the Republicans used Tim Russert to control their message. Tim Russert was selling homage to his father books that promoted him as being a wholesome, traditional, sentimental, mainstream-values "good American", but he was indifferent to the fathers and sons who've been crippled, maimed, disfigured, and killed in Iraq as a result of his disinformation and the disinformation his right-wing guests shilled. Tim Russert claims to be doing God's work in his article "Am I Doing God's Work?" Before Russert became a "journalist", Russert first became famous for his dirty tricks campaigns which were whispering campaigns to other reporters that maligned opposing candidates. Candidates who were attacked by Russert were said to be "Russerted." During his first job in politics working for New York's Senator Daniel Patrick Moynihan, he teamed up with his cohort the neoconservative William Kristol. See the link to the article below where Tim Russert said "Integrity is for paupers!". His other famous quote is "line between security and freedom will have to be redefined."

Be sure to check the Huffington Post - Russert and Russert Watch websites for detailed examples of Russert's "integrity."

Tim Russert frequently asked "loaded questions" to Democrats and critics of Republicans. Tim Russert used subtle language in his questions that imply that anyone who is a Democrat or progressive is temperamental, insane, mentally unballanced, irrational, and just wrong. Whenever he played "gotcha" to a Democrat, he used "facts" given to him from Republicans and right-wing think-tanks; that was his "research". He ambushed Democrats with obscure facts given to him by Republicans, used obscure quotes, quotes from right-wing newspapers (he quoted from Republican political opinion op-ed commentaries as if those op-eds were regular reports), and he used right-wing think-tank talking-points. Some of the Republican political opinion op-ed commentaries Russert quotes come from very extremist right-wing publications. Tim Russert was also a fast-talker and he sometimes puts "mistakes" in his interviews that the interviewee sometimes doesn't always catch. He pressed Democrats on factually incorrect statements until he could get a sound bite answer out of them that he and other right-wing pundits could loop out of context to embarrass them later.

But when Democrat Bill Clinton was President, he gave "softball" interviews to Hillary Clinton which hinted that he sometimes just kowtows to whoever happens to be in authority. I've looked up dozens of websites on Tim Russert and they all pretty much say the same thing.

Tim Russert kept saying that his show featured the "people in power", but he keeps having "political analysts" from right-wing think-tanks who did not have any official position in government on his show while he never had progressive political activists. He let the right-wing think-tank pundits use his show as a forum to shill the same kinds of right-wing rhetoric the radio conservatives and Fox News pundits shill, and Tim Russert just sat there smiling and nodding his head to everything they said without question. That's what he was about. He cared about getting his "media access" to the powerful people in government and upper crust elite society.

Tim Russert routinely downplayed, ignored, and apologized for Republican controversies that made the Republicans look bad. Every time there was a "hot" controversy in the news with Republicans, he had the Republicans who are in the controversy on his show and he gave them weak "softball" nominal questions. That way the Republicans pretended they've responded to the controversy when in actuality, they used Russert's show as a PR ploy to placate their constituents and have actually said nothing. Instead of being a real journalist and reporting the facts as they are, he kept "reframing" the debate by using his famous red herring argument "... but the question is ...". Every time he says "... but the question is ..." he's changed the argument to one where Republicans had talking points that could rationalize and justify whatever controversy is happening. That is a classic right-wing Republican argument technique called "reframing the debate" or also called "bait and switch." By doing that, Tim Russert showed that he was an apologist for right-wing Republicans. Tim Russert once said that the "line between security and freedom will have to be redefined." For Democrats and progressives, Tim Russert was a ruthless hatchet man who did "hit pieces" on Democrats and progressives.

Tim Russert once had Fox News right-wing pundit Bill O'Reilly on his MSNBC show to plug his book. Tim Russert handed his show over to Bill O'Reilly who went on to lambast his critics; Tim Russert nodded in agreement to everything Bill O'Reilly said, refused to point out the painfully obvious contradictions (lies) in O'Reilly's statements, failed to ask the most obvious follow up questions, and proved once and for all that Tim Russert and Bill O'Reilly are of the same ilk. Tim Russert also associated with Don Imus who has said many bigoted statements. Tim Russert's favoritism revealed he was a neo-conservative Republican.

Before the last general election, Tim Russert had been saying for weeks that the upcoming presidential election would be decided by 10% of the voters in 18 "swing states." He was also saying that all the other people in the other states are irrelevant. He kept citing polls as proof without mentioning his polls' wide margins of error. He ignored polls that did not support his agendas. He blatantly discouraged/disenfranched people who are not in the "swing-states" from voting. He preemptively "called the election" over.

Tim Russert thought he was famous for his use of a small white dry eraserboard on election night 2000, but the truth is that was the NBC show's producer's idea. Tim Russert took credit for something that wasn't his idea and then pretends that gimmick is indicative of his character.

PLAMEGATE: Tim Russert was under investigation by the US government for his involvement in the CIA leak case where someone inside the Bush White House revealed to right-wing pundits the identity of a CIA agent in a covert operation. Tim Russert's friend and frequent guest on his shows, Bob Novak, printed the name of that CIA agent, Valerie Plame, as a political retaliation against her husband. Bush White House officials Karl Rove and Lewis "Scooter" Libby said Tim Russert told them that Valerie Plame was a CIA agent. A lot of people want to know how Tim Russert knew such information. U.S. District Chief Judge Thomas Hogan ordered a reporter held for civil contempt and ruled that Tim Russert must testify in the investigation into whether the Bush administration illegally leaked a covert CIA officer's name to the media. The subpoenas, issued by special prosecutor Patrick Fitzgerald, required that Tim Russert appear before a federal grand jury to testify about conversations with an unidentified government official who was a confidential source. Tim Russert, facing potential jail time and fines, negotiated an agreement with the prosecutor and submitted to questioning in August. NBC said Tim Russert offered to be interviewed by Fitzgerald if it would be done under oath but not before a grand jury, and if he would not be asked questions that would have required him to disclose information provided in confidence. Tim Russert bashes progressives and hosts many right-wing guests who call progressives "traitors", but at the same time Tim Russert was involved in a serious breach of national security. Tim Russert and his buddy Bob Novak put that CIA agent's life at risk and wasted millions of dollars that the CIA had spent in their investigations with that agent. Of course NBC has been giving Tim Russert and his buddy Bob Novak a "free pass" for their despicable acts. Arianna Huffington and Eric Boehlert have been writing extensively on Tim Russert's involvement in the CIA leak. See the link to CNN article below "CIA leak: Sources point to Rove-Libby contacts" on Tim Russert's involvement in the CIA leak.

Tim Russert had been selling his book about his father, trying to portray himself as being some kind of rags to riches success story, but his father Big Russ said something funny about his lackey son, "I still can't get over that they pay you all that money to BS on television." (that's Tim Russert quoting his father, Charlie Rose Show, 5/10/04). That's Big Russ's opinion of his son. Apparently Tim Russert grew up in a lower income caste and he did whatever it took to get rich. See below the link to the article that has the quote where Tim Russert said "Integrity is for paupers!"